He was born William Howard Tallant in Jasper, Alabama on December 29, 1926, the first-born child of William Louis and Velvie Greene Tallant. He spent his childhood there until he joined the United States Navy at age 18, and later, he joined the Alabama National Guard. He attended Birmingham Southern College on the GI Bill.

Father Benedict loved the Lord, Our God, with his whole heart. He loved the Holy Orthodox Church and St. Nicholas Parish, where he served as Rector for over 55 years. He was ordained to the Priesthood at St. Nicholas Cathedral in New York City on the 22nd of May, 1962 by Bishop Dosifei, Patriarchal Exarch of North and South America. During his tenure as Rector, he received many awards for his service, some of which include: The promotion to the rank of Archpriest in 1967, the right to wear the Nebedrenik in 1968, the komilavka in 1972, the Gold Cross in 1973, The Palitza in 1982, the Jeweled Cross was presented to him by Patriarch Alexi in Moscow in 1984, the Order of St. Sergei; 1st , 2nd, and 3rd class, the Order of St Daniel of Moscow in 2004, and Patriarch Kyrill awarded the Mitre which was presented to him by Bishop Justinian on the 8th of December, 2013.

He retired from his secular job as a clerk in the Tour Superintendent’s Office of the United States Postal Service at Birmingham in 1986.

Fr. Benedict also loved his family and considered himself the protector of “his girls”. He and the beautiful Jewel Boswell, whom we know as Matushka Monica, were married on April 16, 1949. The Lord blessed them with five daughters and by default, 5 sons: Dorothy, now married to William McCoy, Melissa, now married to Richard Young, Melanie, now married to Larry Wheeler, Janelle, now married to Fr. Paul Davis, and Rhonda, now married to Paul McCracken. They also have been blessed with the legacy of 11 grandchildren: Douglas, Jason, William, Kristie, Amanda, Nicole, Mary, Anastasia, Nicholas, Brandon, and Wendi. They are great-grandparents to 24 children and great-great-grandparents to 3. Father Benedict often spoke of how proud he was of all the children and their accomplishments and generously shared stories and photos with any captive audience. Father is also survived by his sister, Patricia, having been preceded in death by his brothers, Ralph and Bobby, as well as his parents. He is survived by many nieces, nephews, and friends.

Fr. Benedict was an avid historian. He spoke, in addition to English, fluent German and studied Church Slavonic, Russian, and Spanish. He loved to study European, Russian, Aviation, and especially Southern history. The history of the South was particularly dear to his heart. He became a member of the Sons of Confederate Veterans and Commander of Camp Mortimer Jordan Camp #84. He enjoyed re-enacting battles and events of the War Between the States as a camp surgeon and later Surgeon General for the State of Alabama Re-enactors.

He was a voracious reader and critical thinker who never subscribed to the popular narrative on any subject, but did his own extensive research. He owned an impressive library which included books on a wide variety of topics.

Father was also a lover of music of many genres and music from many different countries. Classical, traditional, Southern, German, and music from the 1940’s were his favorites. He had an extensive collection which he shared with anyone who showed an interest.

Father had an interest in all kinds of different things and loved to experience all that life had to offer. He learned to box at an early age and he started taking TaekWonDo classes at age 55 and earned a first-degree black belt.

He was an artist and expressed himself through a variety of mediums, including watercolors, oil paintings, lettering, and building of model aircraft. He was a Charter Member and co-organizer of the Southern Museum of Flight in Birmingham, which will be the recipient of many of his collection of over 500 models.

The Right Reverend Mitred Archpriest Benedict fell peacefully asleep in the Lord on Saturday, November 7, 2020. He reposed at home surrounded by his family.

Father is going to be greatly missed by his family, his parish, and his friends. The world was certainly a better place for his having lived here over 93 years and we are thankful for every one of those years. 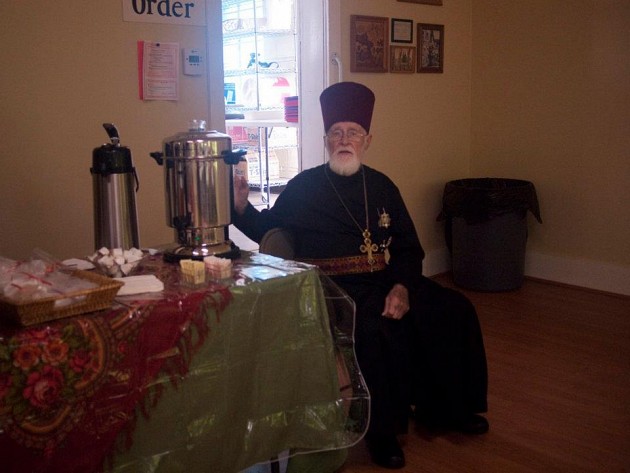